US healthcare spending to nearly double by 2017

According to a recent article (see below), US healthcare spending will be skyrocking in the years to come. Given the difficulties in making coverage decions, I suppose managed care organizations will increasingly request solid economic value propositions of new products seeking formulary listing...

February 26, 2008
US healthcare spending to nearly double by 2017
by Alison Fischer

A report by economists at the US Centers for Medicare and Medicaid Services forecast that healthcare spending in the US will nearly double over the next decade to $4.3 trillion in 2017. The findings were published Tuesday in the journal Health Affairs.
According to the report, healthcare spending will grow by an annual rate of about 6.7 percent through 2017, outpacing annual economic growth of 4.9 percent. The increase in healthcare spending will be due in part to higher prices for drugs and an ageing population who will be seeking treatment for chronic diseases such as high blood pressure and diabetes, the report authors indicated. Furthermore, prescription drug spending over the next decade is expected to more than double to $515.7 billion from the projected $231.3 billion in 2007.
Commenting on the news, Miller Tabak's Les Funtleyder noted that "the growth rates are staggering, when you compare it to inflation." Study author Sean Keehan added that "healthcare is expected to consume an expanding share of the US economy over the next decade, meaning policy makers, insurers, and the public collectively face some difficult decisions about the way healthcare is delivered and paid for."
Posted by ustaginnus@hotmail.com at 2/28/2008 2 comments:

The UK's National Institute for health and Clinical Excellence (NICE) has maintained its view that patients with non-small cell lung cancer in England and Wales should not be treated with Roche's Tarceva (erlotinib) because it is not a cost-effective use of national health service resources.
New draft guidance from the institute, which evaluates health technology for the NHS, repeats the main conclusions of a draft circulated last year. Although a NICE appeals panel upheld several points raised by Roche and others against the original draft guidance, the appraisal committee has not substantially altered its negative opinion in a new document (Scrip No 3301, p 2).
Roche says it is shocked and disappointed that the institute's evaluation of Tarceva remains negative. The company adds that it will "firmly challenge the points this document raises". It points out that the product is being used widely to treat NSCLC patients in Europe - even in Scotland - and insists that English patients could also benefit.
The prospective NICE guidance - now being circulated in a public consultation - still finds that Tarceva's clinical and cost-effectiveness compares unfavourably with Sanofi-Aventis's Taxotere (docetaxel) in the treatment of locally advanced or metastatic NSCLC.
The appraisal committee is "not persuaded that erlotinib had a proven equivalent survival benefit when compared with docetaxel", "not persuaded that erlotinib was proven to provide longer duration of progression-free survival than docetaxel" and refuses to recommend the Roche product where Sanofi-Aventis's is a treatment option.
Cost-effectiveness arguments led the appraisal committee to rule out second-line use of erlotinib when docetaxel is unsuitable, or third-line use after the failure of docetaxel. As before, the committee says current evidence is insufficient to allow conclusions about the suitability of Tarceva for treating specific subgroups.
The appraisal committee is expected to meet again on March 12th to consider comments lodged during the public consultation period, which closes on March 3rd.
Roche instituted a patient access programme to make Tarceva available to English patients at a reduced cost to the NHS while NICE conducted its appraisal. The company says the programme will remain in place until final guidance is given and then for a further three months.
SCRIP - World Pharmaceutical News - www.scripnews.com FILED 14 February 2008 COPYRIGHT Informa UK Ltd 2008
Posted by ustaginnus@hotmail.com at 2/15/2008 No comments:

The Bruckner group has published a new article on the issues of market access for biologics (see press release) in Nature Biotechnology's February edition. Personally I think it couldn't be more timely and it is also very well written. I especially like the clearcut analysis about the unavoidable adaptation needs in business strategy and organizational structure of pharmaceutical and biotech companies in order to prepare their organizations for the changing healthcare/payer environment. It sums it up just right - a great read!

If you would like to receive the article you can either email David Balekdjian, Partner at the the Bruckner group, or send a note to me and I will forward a copy.
Posted by ustaginnus@hotmail.com at 2/13/2008 No comments:

The Uk Parliament published an extenive report on the National Institute for Clinical Excellence (NICE) - past performance and its potential role going forward, especially in relation to future drug pricing in the UK. A must read for anyone involved in global health technology assessment, health economics, pricing and market access matters.
Posted by ustaginnus@hotmail.com at 2/07/2008 No comments: 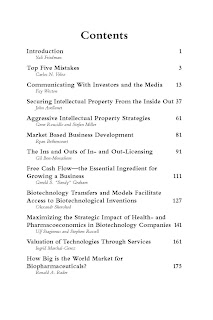 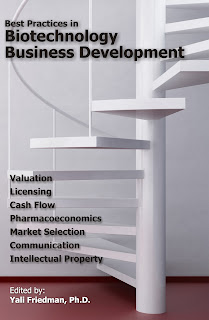 Please email me if you are interested in a pdf of the Pharmacoeconomics chapter.

MarcusEvans is hosting the conference on Feb 18-19, 2008 in the Radisson SAS Hotel, Amsterdam

Key Topics:
Abbott developing a strategy to enhancing outcomes research to truly analyse the patients needs
Baxter outlining the prospect of one single European agency - EuroNICE
Bayer-Schering examining leading strategies for streamlining communication with sales and marketing
Pfizer analysing the importance of outcomes research to demonstrate the value for a product
Sanofi-Aventis assessing the role of economics in pricing and reimbursement
Posted by ustaginnus@hotmail.com at 2/01/2008 No comments:

latest edition of the Spanish Journal of Health Economics 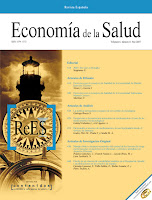 The latest edition of the Spanish Journal of Health Economics is available. For all of you interested in the development of regulations around biosimilars there is an interesting article on the subject (in Spanish).
Posted by ustaginnus@hotmail.com at 2/01/2008 No comments: