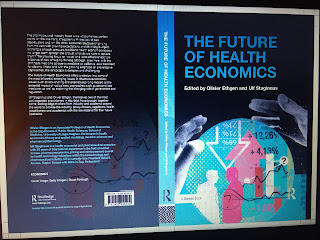 Olivier, the "work horse" ;) finally managed to get all the chapters back from the various authors and the book goes into print. Book should be available at Routledge in a couple of month.

Regards
Ulf
Posted by ustaginnus@hotmail.com at 10/04/2016 No comments:

just saw an interesting post (https://www.iqwig.de/en/press/press-releases/press-releases/adaptive-pathways-ema-still-leaves-open-questions-unanswered.7492.html) from IQWIG, that speaks to the difficulties to get even a clinical effectiveness assessment under one roof as always proposed by various stakeholders. Clearly the RWE bit is still an open book in many ways but a topic to be tackled on various fronts in order to make true value based pricing a reality.

Cheers
Ulf
Posted by ustaginnus@hotmail.com at 8/18/2016 No comments:


What is the value of a human life? It is one of the most fraught questions in public policy as governments around the world struggle with rising healthcare costs from ageing populations.


The answer matters not only to patients, taxpayers and insurers, but also to the pharmaceuticals companies seeking rewards for the medical advances that have helped double global life expectancy in the past century.

Nowhere is the debate more intense than in the UK, where budget pressure on the National Health Service has capped growth of the annual £12bn drugs bill and created tensions with the often competing interests of the pharma sector.


“We can’t continue as we have in the past,” George Freeman, UK life sciences minister, told a conference in London last week, urging a “new deal” between government and drugmakers.


Mr Freeman’s vision will be set out in an official report later this year which is expected to propose mechanisms for getting the most promising new therapies to patients faster and affordably. Meanwhile, an overhaul of the way cancer drugs are evaluated for the NHS is due to come in to force in July.


Together, these developments promise to make the UK a test of whether austerity-hit western societies can keep up with the quickening pace of medical innovation. A surge in drug approvals over the past two years has revived faith in the pharma industry’s productivity after a long fallow spell and a further wave of products are nearing market, many involving transformativetechniques targeting faulty genes or modifying cells. Yet the cost of these advances threatens to increase strain on the NHS as it chases savings of £22bn by 2020.


It is a dilemma echoed in public health systems across Europe but also, increasingly, across the Atlantic as the US seeks to keep a lid on the $3tn it spends each year on healthcare.


At the forefront of pharma


The UK’s importance as a test bed goes beyond its 3 per cent share of global pharma sales. As home of GlaxoSmithKline and AstraZeneca, two of Europe’s largest drugmakers, and half the world’s top 10 medical research universities, according to Times Higher Education, the country punches above its weight in life sciences. Many of the world’s best-selling drugs belong to a category called monoclonal antibodies pioneered by UK scientists in the 1970s and 1980s.


Yet British patients have not always benefited from homegrown innovation; the country has among the slowest uptake of new drugs in western Europe. This reflects the tough hurdles created by the National Institute for Health and Care Excellence, which acts as gatekeeper for companies seeking access to the NHS for their medicines. The agency, known as Nice, weighs the price of a treatment versus the benefit to patients measured by a formula called “quality-adjusted life years added” or qualy. It will not normally recommend a drug costing more than £30,000 per qualy.


This dispassionate approach to life and death decisions has given Nice global influence as a model of evidence-based policymaking. Yet the UK system has many critics, especially among drug companies and patient groups who see its methodology as too rigid and its £30,000 spending cap as too low. “Only a very small number of countries operate with such a fixed threshold,” says Richard Erwin, UK general manager for Roche, the Swiss pharma group.


The fiercest disputes have involved cancer drugs. These tend to be very expensive — especially those for advanced or rare forms of the disease — because companies need to make a return on investment from relatively small numbers of patients during short periods of treatment. In recognition of these issues Nice has a higher £50,000-per-qualy threshold for “end of life” treatments. Even this is often not high enough for modern cancer drugs. Since 2011, the agency has rejected more than half the treatments it has evaluated.


For admirers of the UK system, Nice should be applauded for its scepticism towards drugs that often provide just a few extra months of life, at best, for large sums of money that could be used more productively elsewhere in the NHS. “The price we can afford to pay is the point at which the benefits [of a drug] match the benefits we are going to give up as a consequence of those net costs,” says Karl Claxton, a health economist at the University of York.


This argument might seem incontestableto academics but David Cameron, UK prime minister, knew that cancer patients and their families would not accept it. Alarmed by data showing the UK falling behind other western European countries in cancer survival rates, he set up a special scheme in 2010 to provide extra funds for cancer drugs deemed too expensive by Nice.


Since then, 80,000 people have received treatments through the Cancer Drugs Fund. Without Nice’s scrutiny, there was no pressure on companies to moderate prices or doctors to moderate use. This resulted in the cost of the fund soaring from £38m in 2010-11 to £416m in 2014-15 — 50 per cent over that year’s budget. “The Cancer Drugs Fund shows once and for all that there is no blank cheque big enough to solve this problem,” says Prof Claxton.


In an attempt to restore fiscal discipline, NHS England in February confirmed plans to restore Nice’s power of veto. From July, it will evaluate all new cancer drugs within 90 days of regulatory approval — faster than in the past — and issue a “yes, no, or maybe”. The “maybes” — medicines that show promise but require more evidence — will be financed for up to two years by a revamped Cancer Drugs Fund. Only if they prove their worth during that probation period will they be recommended for use.


NHS England say the changes will put cancer care back on a sustainable footing and ensure money is directed at the most effective treatments. However, there have been protests from pharma companies and their allies which fear that without change to Nice’s methodology, most of their products will be blocked. One charity said cancer care in the NHS risked being “set back by a generation”. Erik Nordkamp, UK managing director for Pfizer, said even crisis-hit Greece had wider access to the latest treatments.


Sir Andrew Dillon, Nice chief executive, says there is a simple remedy: companies should drop their prices. “Unless there is a change in price or in the quantum of benefits these drugs bring to patients, then the Nice methodology will result in broadly the same outcomes as before. Ultimately, it is up to the companies to decide.”


Drugmakers question why they should be expected to offer further discounts to the UK when it already has among the lowest prices in the developed world. The industry has paid more than £1bn in rebates to the Department of Health since a 2013 deal that capped annual growth in the NHS drugs bill at a below-inflation rate for five years — with companies collectively reimbursing any spending above the agreed limit.


The fear is that any further squeeze in the UK would have a knock-on effect on pricing across Europe. This, in turn, would risk increasing US political scrutiny of the transatlantic divide in drug costs that can see Americans pay double the price for medicines — due in large part to the absence of UK-style controls on spending.


There is little immediate prospect of the US setting up a federal rationing body. However, there are signs that some people are learning lessons from Nice. New York’s Memorial Sloan Kettering Cancer Center, one of the leading US cancer hospitals, last year launched an online tool called DrugAbacus to help healthcare providers assess the value of cancer drugs.


Drug companies are responding by experimenting with pay-for-performance models tied to how well a medicine works rather than the volume sold. But Alexander Moscho, UK head of Bayer, the German drugmaker, says the qualy system is not flexible enough for the new world of personalised medicines. “It needs a new approach which is not one-size-fits-all.”


Sir Andrew, who has been in charge of Nice since its launch in 1999, denies that the system is broken. “I would not argue that Nice’s methodology is perfect but I don’t think there is anything fundamentally wrong with it either. In terms of being able to do a rigorous evaluation of what a product offers, I think we do that really well.”


Drug makers have been at loggerheads with Nice since its first ruling 17 years ago prompted a veiled threat by Glaxo to quit the UK, saying the decision called “into question the suitability of the UK as a base for multinational pharmaceuticals operations”. AstraZeneca, which is building a £330m R&D base in Cambridge, issued a similar rebuke last year when Nice resisted olaparib, its homegrown ovarian cancer drug. “How can a government say they want this country to be an innovation centre … yet when we discover new innovation it doesn’t find a market?” asked Pascal Soriot, chief executive.


For advocates of Nice, these confrontations are proof that the model has succeeded in creating a neutral arbiter. Pharma leaders, however, feel there should be more support for an industry that accounts for a quarter of the UK’s private sector research and development spending.


“If new medicines are not being used in the UK, global companies will not invest here,” says Mike Thompson, chief executive of the Association of the British Pharmaceutical Industry.


It is this stand-off that led Mr Freeman to launch the accelerated access review last year, led by Sir Hugh Taylor, formerly a senior civil servant at the health department. His report has been delayed, like much else in Whitehall, until after the referendum on UK membership of the EU in June.


It is expected to propose that new medicines showing the greatest promise should be given early conditional access to NHS patients. Usage would be gradually expanded as “real world” data are accumulated on safety and efficacy. In theory, this should lower drug development costs by reducing time to market and lead to more consensual pricing discussions based on a clearer picture of the value offered.


“Everyone benefits: companies get a quicker return on a lower investment and patients get access to medicines faster,” says Stuart Dollow, an adviser to Sir Hugh’s review. “It is about getting away from the current adversarial model where industry goes in with a high price knowing it is going to get negotiated down.”


Pharma companies say they can be part of the solution to the NHS budget crisis by providing treatments that reduce long-term costs. Novartis, the Swiss drugmaker, last week reported strong demand in Europe for a new drug that has shown the potential to cut hospitalisation rates from heart failure by a fifth.


“We need to stop looking at medicines as a cost and look at the value they can create for UK plc,” says Mr Thompson. He admits, though, that the industry will have to be realistic about pricing. “There is a clear message from government: There is no more money.”
Posted by ustaginnus@hotmail.com at 4/27/2016 No comments: