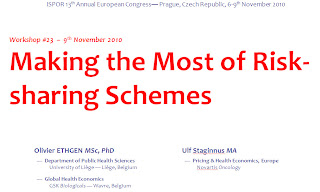 just a quick "advertisement" that Olivier and I will do again a workshop on Risk Sharing during the ISPOR conference in Prag. The last one was well attended and we got great feedback from everyone, so I hope to see many participants and count on you to spread the word a little. I will be giving an introduction from the perspective of a "practitioner" and Olivier will walk you through some technical concepts - no fear all in a very simple and fun way. See you at ISPOR: Tuesday, 9 November 2010, 16:00-17:00
best wishes
Ulf
Posted by ustaginnus@hotmail.com at 10/28/2010 No comments:

Minister confirms NICE will be sidelined in drug evaluation


NICE's London offices: Lord Howe admitted the cost-effectiveness body will be moved away from single health technology assessments towards the formulation of quality standards

A health minister has confirmed NICE will be “moved” from its current central role in health technology assessment to make way for value-based pricing of medicines.
Health Minister Lord Howe was speaking at a conference co-hosted by industry bodies the ABPI and the BIA on the future of innovation and drug research and development.

NICE has long been seen as a barrier to access by the pharma and biotech industries, and now the Conservatives have confirmed their plans to muzzle the clinical effectiveness watchdog.

NHS bodies are currently obliged to follow (or at least consider) NICE ‘guidance’ but the changes will mean its cost-effectiveness reports will in future be purely ‘advisory’.

When asked if NICE’s role in HTA was to be removed, Lord Howe admitted that the cost-effectiveness body had become “redundant” and would be “moved gradually away from single health technology assessments towards the formulation of quality standards.”

Lord Howe was careful to say that the work NICE does to evaluate clinical cost-effectiveness will remain “very, very important”, but added: “in terms of cost-effectiveness, even though we will rely on NICE’s advise, we will move onto our own value-based pricing system [VBP].”

Speaking at the same event David Willetts, minister for universities and science, said the Department of Health was looking for a “change in NICE” and, having previously discussed the issue with health secretary Andrew Lansley, Willetts added: “I know that he [Lansley] wants NICE to have a more advisory role as VBP comes into place.”

Value-based pricing for UK pharma
The health minister was keen to confirm that the existing pricing agreement, the PPRS, would be honoured until it ends in three years’ time.

Lord Howe said: “So that there is no doubt, the current terms of the PPRS pricing system will be upheld in full until it comes to an end in 2013,” but after this it will be replaced by the government’s evolving definition of value.

He stressed however that the coalition government wants to ensure that patients and the NHS are allowed access to the medicines they both want and require.

“We need a much closer link to the price the NHS pays and the value that a new medicine delivers,” and Lord Howe said that the new system of value-based pricing, to be introduced after the PPRS expires in late 2013, will deliver this.

Lord Howe told Pharmafocus that the details were still to be “ironed out” as to what will define ‘value’ in this context, but he did express the need that its definition must be broadly agreed by pharma, patients and the NHS.

The ABPI has confirmed that it is in close talks with the minister to ensure the ‘best deal’ for pharma and for patients.

"Dynamic Pricing" Would Use CER To Save Medicare Costs


Despite barriers built into the health reform law to prevent use of comparative cost analyses to set Medicare reimbursement rates, allowing such analyses could enable billions in savings, according to an article in the October issue of Health Affairs.
"The time is ripe for Medicare to use comparative effectiveness research to reach a new paradigm, which would include equal payments for services that provide equivalent results," consultant Steven Pearson proposed during a Washington, D.C., conference hosted by Health Affairs Oct. 5. Pearson, who is president of the Institute for Clinical and Economic Review (ICER) at Massachusetts General Hospital's Institute for Technology Assessment, coauthored the paper on the proposed pricing scheme with physician Peter B. Bach, Memorial Sloan-Ketteringm Cancer Center, New York.

Under the "dynamic pricing" model envisioned by Pearson and Bach, CMS would cover and
reimburse an innovative new technology or new drug therapy under Medicare the same way it does now, but only for three years. During that time, manufacturers and clinicians would have to carry out research to compare the performance of the new treatment to a traditional approach. If evidence showed that the treatment did not offer clinical advantages, then CMS would cut the price to the level it pays for
the equivalent, conventional treatment. But if the evidence showed that the new intervention was superior to the traditional method,then Medicare would continue to pay the higher rate. The model would apply to both medical devices and drugs, Pearson said, and it would be similar to the coverage-with-evidence-development model that CMS used for positron emission tomography for cancer back in 2009.
The new model would save money by avoiding continued high payments for technologies or therapies for which there is insufficient evidence to show their clinical worth versus traditional approaches.
Pearson cited Medicare coverage of drug-eluting stents as one example of when higher prices were set for an innovative medical technology even though there was little or no evidence to show that the newly covered technology was superior, or even equal to, a less expensive traditional option. If dynamic pricing had been used in cases such as this, manufacturers would have had three years to prove their product's superiority over older therapies, or if they could not, the new treatments would be reimbursed at a lower rate, at the end of that period. "We would use the pricing analysis mechanism of Medicare" to achieve the lower costs results offered by dynamic pricing, Pearson said.

Because dynamic pricing might ultimately result in lower Medicare reimbursement for
treatments that fail to prove their superiority in comparative studies, Pearson said he believes that the model is likely to be contested by device and drug manufacturers. Another challenge would be the need to amend the Affordable Care Act to allow the approach,Pearson noted. As was pointed out in a separate study presented at the Health Affairs briefing by Harold Sox of Dartmouth Medical School, there are several places in the Affordable Care Act stipulating that the Patient-Centered Outcomes Research Institute (PCORI) is not allowed to use cost considerations in designing comparative effectiveness studies. Similarly, the health reform law prohibits comparative effectiveness studies from being used by the Medicare program to set reimbursement rates. However, the prohibitions in the law do not restrict a private individual or institution from using clinical comparative information developed by PCORI to make their own private analyses of which technologies may be effective, and save money at the same time, Sox said.
"The public is paying for [comparative effectiveness research], and these measurements are a public good," Sox remarked.

[Editor's note: More news on the medical device and diagnostics industries is available each week in 1 'The Gray Sheet.' Visit our website to sign up for a free trial, or call 1-800-332-2181.]