AMNOG and its implications in Germany - Webinar

please find below an announcement for a webinar organized by Kakushin group about the changes introduced by the new drug law in Germany and its potential implications. I will give an overview from a pricing perspective. 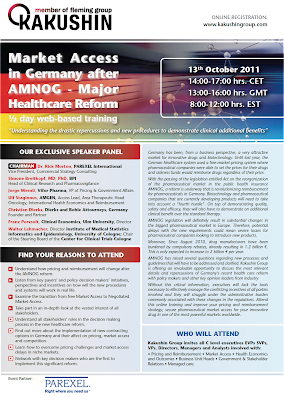 I am pleased to finally announce the results from the compensation survey! I know many of you have been eager to see the data and therefore I would also like to apologize for the slight delay and thank all of you again who have participated and been patient. It took a little longer than anticipted to get through the data but as promised here is the executive summary. I am curious as to your views and comments, please do not hesitate to get in touch - more info as to the survey and possibility to obtain additional data you will find in the post below. Best wishes - Ulf

The first global anonymous compensation survey for Health Economics, Pricing and Market Access professional conducted by Ulf Staginnus, author of healtheconomicsblog.com in collaboration with HealthEconomics.Com has been completed. A wealth of data from various countries and parts of the world has been obtained via an online questionnaire powered by surveymonkey.com. I therefore would like to sincerely thank everyone who has participated and recommend the survey to friends and colleagues!

I am very delighted to have reached a decent sample size with a total of 212 responses, but I hope we can increase this next time and get an even more precise picture. Below pie chart depicts the distribution among the various occupations.


Where do people work?

The most common place of employment was in a Pharmaceutical Company or a Consultancy, each representing slightly more than one-third of the population. About 10% percent of respondents were from Academia, almost 9% in Medical Device companies and an even split of 3,6% between Biotechnology and HTA/ Governmental agencies. 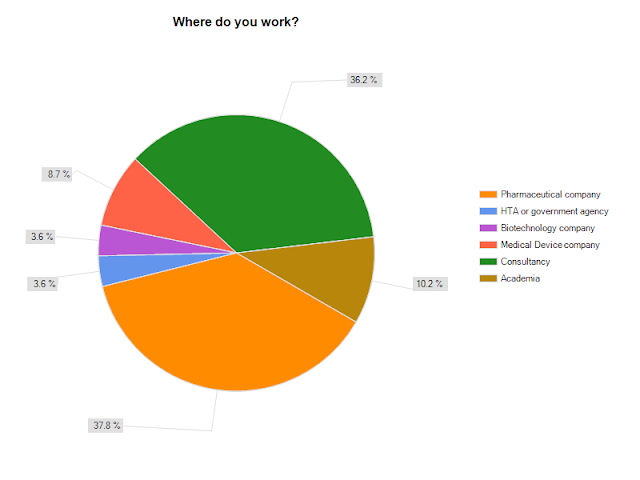 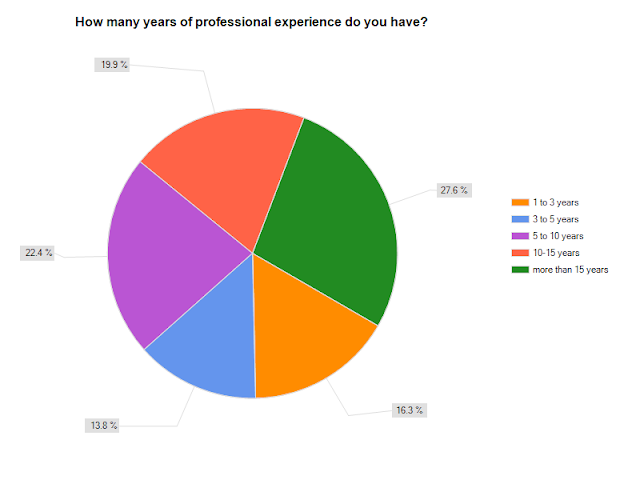 The mean salary in the US sample was US$145.760 with a minimum of US$19.000 for a Graduate Research Assistant in academia and a maximum annual salary of $US250.000 for a Chief Operating Officer of a consulting company.

The highest salaries are paid in Switzerland, Denmark, Germany and the US. On the bottom of the pay scale ranges were the countries of Spain, Italy and those within the Emerging markets (e.g. Brazil, China) as well as the central Eastern European markets.

Salaries can be considered representative across position level, as there was a relatively even distribution among the various seniority groups collected during the survey. As previously mentioned, we are probably missing more data from the very senior levels (e.g. Executive Director and VPs) due to an under-represented sample, as well as from the very junior entry level positions. The survey indicates that the ranges for very senior level executives can be expected to start at approximately US$250.000 in the US, Swiss Franc 300.000 in Switzerland, and €200.000 in Germany for example.

As outlined above, there were only a few responses from individuals working in HTA agencies and insurance companies, but a relatively reasonable sample (n=20) from academia, mostly from the US. Academia and HTA agency salaries were generally lower than the salary of those employed in the industry, although one has to bear in mind that many have additional income through consulting projects.

Regarding additional benefits, 73% of respondents had positions which conferred health care benefits. While this is a relatively high percentage, it could have been expected to be somewhat higher. Most (70%) survey respondents are covered with either accidental and/or life insurance by their employers. About a third of respondents have the corporate benefit of a company car. This appears to be most common in Europe due special taxation advantages for employers. More than one-half of the respondents have a private pension plan with their company. Tuition reimbursement or school fees covered by the company represented a small percentage of total benefits and this typically represents a higher proportion for expatriates or for those relocating to positions at corporate headquarters (e.g. mainly when relocating to headquarters in Switzerland, Belgium and the UK).

Other benefits reported by respondents include meal vouchers (especially in Europe), reimbursement for home internet, and the provision of smart phones or other types of IT equipment (e.g. iPads).

It is also interesting to see that more and more companies come around the concept of flexibility on location and allow time from work at home, support home offices and flex time as well as offer specific commuting solutions. This I think becomes even more important for very experienced and senior people in order to attract and retain this talent. 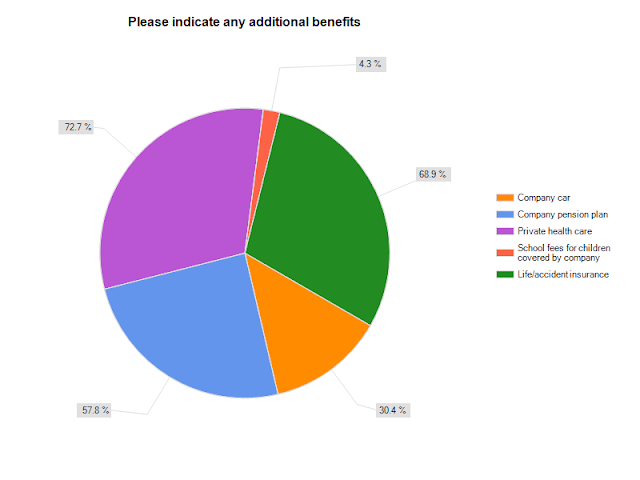 More than one-half (65%) of respondents in the overall sample received a bonus, in addition to their base salary. The data is however more dispersed. Bonuses tend to range from 10% to 20% of the annual gross salary, and this varies substantially with company total sales volume and individual performance. More senior executives stated typical bonus ranges of 25% to 30% of gross salary, while junior positions most typically either had no bonus, or a maximum of 10% to 15% of gross salary. Bonuses for senior professionals in consultancy tend to be somewhat higher.

Stock options and restricted share benefits were assessed using an open-ended question, and as a result, the responses were quite varied. However, a broad trend is recognizable. There is a clear distinction on the share option front. In the US, regular and significant restricted shares and stock options are being granted, and form a significant proportion of the overall package; however, this practice is much less common in Europe, suggesting that European based employers need to be more aggressive with this remuneration element in order to remain internationally competitive.

Conclusions and Other Observations

• Remuneration of professionals in this field remains attractive. However, in areas where a substantial proportion of graduates and professionals are coming into the market, such as the UK, salary levels in the entry and middle management positions most likely will slightly decrease, or at least stabilize over time.

• The challenge is to find experienced personnel with relevant country, negotiation, practical health policy and commercial expertise. Professionals that posses that skill set coupled with the ability speak multiple languages will continue to enjoy premium pay.

• Southern European as well as Eastern European countries and Emerging markets are at the lower end of the pay scale. However, with increasing requirements and growth in market size, there will likely be an upward correction on the remuneration side in order to attract and retain experienced professionals.

• Although not specifically analyzed in this survey, headquarter positions typically command a higher pay. This may explain the higher salaries in Switzerland and certain other markets that tend toward a centralized corporate structure, as opposed to field-based professionals.

• US salaries are generally quite attractive, especially with increasing level of seniority. Main additional benefits in Europe include the company car, while the benefit of private health care coverage plays a more important role in the US.

The above data is an executive summary only. Additional data analysis can be conducted, for example:

These analyses can be made available on individual request and are subject to a processing fee to cover data analysis and reporting cost. In addition to that, individuals, human resources departments and recruiters can additionally purchase more detailed data sets. Tiered pricing will be applied with specific discounts for students and HTA and/or governmental agency employees.

Please contact me (ustaginnus@hotmail.com) in case of additional data needs. We will get back to you with a specific quote and timing in relation to the data consulting request.

Chandler Chicco is running a social media and health event. As I posted previously, social media and IT improvements in the pharma sector could become much more important in data collections and connections to patients. Further details on this event from the organizers.

Shire CEO: Pharma must "wake up" to new price reality

I had the pleasure to be on a joint panel with Angus Russell during the 2011 World Health Conference in Brussels about pharmaceutical pricing, where he also stated that pharma needs to start to face reality... I couldn't more agree with this article as many value propositions are unfortunately message heavy and data light.. it's time that true product performance is demonstrated otherwise all that market acess talk and wanting to understand payer perspectices etc. is for nothing..


Shire CEO Angus Russell said Wednesday that the drugmaker is now initiating head-to-head studies as early as Phase 1, so as to avoid expensive late-stage clinical trials if the potential therapy does not show promise to be best in class, and urged others in the industry to follow suit, Boston Business Journal reported.
Russell said in the future, other markets are likely to follow Germany’s lead in deciding not to pay for drugs that have not been evaluated in head-to-head trials with approved drugs.
The executive said payers and policymakers talk about value, not innovation, and that “if you ignore payers and policymakers, you are not going to be successful in the new world we are entering.”
Russell criticized the lack of coordination between business, regulatory bodies and government health payers, whereby pharmaceutical companies consult with regulators early in the drug development process to design clinical trials, but only after approval, or just before, do they consult with payers about pricing for the drugs.
He noted that “we are all losers at the end of the day if payers don’t want the drugs," or don’t pay a return that is acceptable to shareholders and urged the industry to open up dialogue with regulators, saying “if we don’t get involved ... we’ll end up in a bad place.”
Posted by ustaginnus@hotmail.com at 9/08/2011 No comments: