Drug Deals Tie Prices to How Well Patients Do

one more interesting article from the NY times...

ANDREW POLLACK
Published: April 22, 2009
Think of it as product guarantees by the drug industry.

Merck, via Bloomberg News
Januvia, by Merck, is part of a cost-control deal with Cigna.
Pressed by insurance companies, some drug makers are beginning to adjust what they charge for their drugs, based on how well the medicines improve patients’ health.
In a deal expected to be announced Thursday, Merck has agreed to peg what the insurer Cigna pays for the diabetes drugs Januvia and Janumet to how well Type 2 diabetes patients are able to control their blood sugar.
And last week, the two companies that jointly sell the osteoporosis drug Actonel agreed to reimburse the insurer Health Alliance for the costs of treating fractures suffered by patients taking that medicine.
“We’re standing behind our product,” said Dan Hecht, general manager of the North American pharmaceutical business of Procter & Gamble, which sells Actonel with Sanofi-Aventis. “We’re willing to put our money where our mouth is.”
Some experts hail such arrangements as a welcome step toward health care that rewards good outcomes for patients.
“We’re going to see a growth in outcomes guarantees for pharmaceuticals, and it’s very healthy,” said Robert Seidman, a consultant who was formerly the chief pharmacy officer for WellPoint, an insurance company.
Traditionally, discounts and rebates that drug companies offer insurers have been based on how much drug is used, not how well patients do. But the emerging, outcomes-based contracts would — in theory — better align the incentives of insurers, drug companies and the employers that provide health coverage toward improving people’s health.
Such pay-for-performance contracts started to take hold a few years ago in countries with national health systems, in which the government could effectively block a drug from being used if it was too costly.
Johnson & Johnson set what is considered the prototype deal in 2007 with Britain’s national health system, which had tentatively decided not to pay for the cancer drug Velcade. To avert that decision, the company offered essentially a money-back guarantee. If Velcade did not shrink a patient’s tumors after a trial treatment, the company would reimburse the health system for the cost of that patient’s drug.
In the United States, where insurance companies do not have national monopolies — and where Medicare, by law, is precluded from negotiating drug prices — insurers have less leverage with drug makers. Even so, they can give favorable treatment to certain drugs, by reducing the required co-payments, for example.
Under the Actonel deal, if a patient insured by Health Alliance suffers a nonspinal fracture despite faithfully taking Actonel, the drug makers will help pay for the medical care — spending $30,000 for a hip fracture, for instance, and $6,000 for a wrist fracture.
This clearly lowers the cost of the drug to Health Alliance, a small insurer in Illinois and Iowa. But Procter & Gamble and Sanofi-Aventis might benefit as well. The deal could reduce the pressure on the insurance company to move patients off Actonel, which costs about $100 a month, to less-expensive generic versions of Fosamax. And the insurer has kept Actonel in a tier of its drug list that requires a smaller co-payment than for a competing brand-name drug, Boniva.

The deal between Cigna and Merck is more complex.

Rather than getting paid more for good results, Merck will actually give Cigna bigger discounts on Januvia and Janumet. Some discounts will be granted if more people diligently take the drugs as prescribed. This helps both Cigna, because people who take their pills are likely to have fewer complications from the disease, and Merck, because it sells more pills. The assumption is that Cigna will push for patient-compliance programs that urge people to take their medicine at the right times and in the proper doses.
Moreover, in an unusual move, Merck will offer even greater discounts to Cigna on Januvia and Janumet if patients’ blood sugar is better controlled — regardless of whether the improvement comes through Merck’s drugs or other medications.
In effect, though, Merck is betting not only that its drugs prove superior but that Cigna’s incentives to reap the benefits of the deeper Januvia and Janumet discounts will prompt the insurer to try to keep patients on those drugs.
As part of the agreement, too, Merck will get better placement for Januvia and Janumet on Cigna’s formulary, meaning a lower co-payment for patients than for some other branded drugs. The deal was made with the pharmacy benefit management division of Cigna, which manages prescriptions for 7.1 million people.
Merck declined a request for an interview. In a statement the company said it was “committed to finding new approaches to demonstrate the value of our products to patients, physicians and payers.”
Januvia, approved in 2006, costs about $150 a month. Janumet, approved a year later, is a combination of Januvia and metformin, a widely used generic drug.
Eric Elliott, the president of Cigna Pharmacy Management, said his company was negotiating similar contracts with other drug makers.

“We wanted a contract that drives performance,” he said. “Getting this one out will provide more momentum.”
Posted by ustaginnus@hotmail.com at 4/27/2009 3 comments:

comming back from the Zurich Oncology market access conference I received a couple of mails from readers regarding the entire risk sharing topic - many thanks for that.

For those of you having a subscription to BioCentury there was a very good review article on that matter (just posting the abstract):

• Cover Story - Cost-Sharing Arithmetic - NICE has added Celgene's Revlimid to its approved set of cost-sharing deals. But it has also shown it can walk away from these schemes if it doesn't like the numbers. In the long run, pricing specialists say it will be better to compile data showing superior clinical outcomes.

Also, I also received an interesting article from the US on new risk sharing deals.

Certainly a hot topic at the moment, I'll keep you posted on developments.

Cheers
Ulf
Posted by ustaginnus@hotmail.com at 4/27/2009 No comments:

Payers view on risk sharing and outcomes based agreements...? 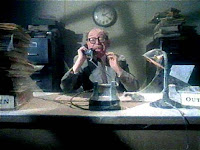 in order to prepare for a conference talk that I will be giving next week in Zurich I asked the network via linkedin: "I would be interested in hearing your thoughts/comments on how payers view risk sharing and outcomes based agreements?"

Over the last week I have received a lot and valuable comments and therefore would like to thank all of you who provided an answer! Since this is a hot topic and many of you wrote me that you are actually wondering about the same issue, I post all answers below for the broader audience.

"I would be interested in hearing your thoughts/comments on how payers view risk sharing and outcomes based agreements?"

Answers received (for privacy reasons all names have been erased)

Payers may react positively if they disagree with your value hypothesis and wish proof in daily practice. They may react negatively if they feel no need e.g. one has always reimbursed non responders. Administrative burden is another important element that has to be traded off versus why not just a lower price?

We have found in our work in this area that these schemes are only meant for a small minority of situations, and that over-emphasis on innovative risk sharing pre-launch may distract from basic focus on clinical value shaping and appropriate planning for traditional payer agreements.

In Spain I have tried to settle an agreement with one of our regions. We managed to reach a consensus about the value proposition, but it was impossible to agree on: 1.- Which Health Authority has to sign the agreement: the manager of the hospital, the Regional Health Authority, the National Health Authority. The payor or the provider? 2.- What to measure: subrogate or final variables, clinical or patient reported outcomes 3.- What subpopulation of patients: as SmPC, other. Should the contract be the same in all populations. 4.- Length of the agreement: first years to market or all. 5.- Who will measure the results of the drug?, a CRO, they or us? 6.- Should the agreement be public?

I am seeing a more proactive request for this type of agreements from Spanish Regional Government payers, mainly when talking about very expensive drugs and with a cost-containment exercise in mind. There are already some examples in some regions, although details are kept confidential. However, as it has been mentioned, in my experience, they do not really know how to go about it: they can and do protocolisation of treatment regimens in certain subpopulation groups but do not know what or how to measure outcomes, clinical and economic. I regard this as a big opportunity for industry and payers. Personalized medicines offers a new, easier ground also.

Generally I think payers would like to see them happen more frequently but it is a treacherous pathway to take because of the measurement difficulties over the agreement (the outcomes part if you like) - the area is certainly evolving.

From previous discussion with payers on risk sharing, payers have often told me that they would like to see the true cost savings and/or benefit of getting involved in such a scheme. If the administrative burden and cost outweigh the savings then it is unlikely to generate any interest

We know NICE are all for it - in the revised STA submission form, there is even a place for such proposals. Also, in the new process, a risk-share has to be introduced at the time of submission. To date, people would wait to receive a negative ACD before suggesting a risk-share now they have to do it at the start.

...this is highly variable depending on the market. Some markets, such as France, already have financial based schemes in place (payback agreements), and therefore have little interest in outcomes based agreements. Others, are more open to the concept. However, a very important challenge is whether or not the payer has access to the necessary data to execute a risk sharing agreement - do they have the patient level information to be able to adjudicate the agreement later on? Payers, like everyone, are interested in agreements that: 1) Save them the most amount of money 2) Are very transparent (low risk) 3) Involve the least amount of administrative work

…Risk sharing agreements are very good for expensive drugs that has been approved by early data that has not yet shown its full potential. New oncology drugs are a good example of this….

don't have the answer but having the same question…For the time being, we have had a variety of failure and success building those kind of agreements with EU payers …

…..My views on usage of outcomes based agreement would depend very much on the nature of services contracted and market dynamics.
Posted by ustaginnus@hotmail.com at 4/15/2009 No comments: 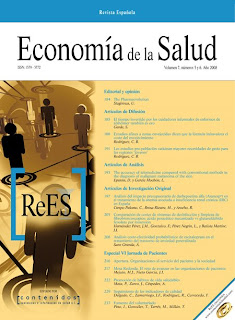 the latest edition of the Spanish journal for health economics is out. The journal is enjoying increasing readership within the Spanish speaking community although there are also publications in English. I contributed en editorial "The Pharmaevolution" speculating a little on the latest developments - consolidation is increasing again and new business and organizational models are being tested and deployed. Would be interesting to hear your thoughts on the sectors' evolution...?